There’s been a lot of debate throughout the internet, and I’d assume it continues in person (I live in the country, so I wouldn’t really know) about anarchists and organisation. The basic point of this piece is to say, enough hollering at each other, just fucking get to it.

I think debate is important for strengthening revolutionaries, but I think there’s also a point where it becomes masturbatory, and I think we crossed the line a while back. Some seem to be convinced, whether pro or anti organisation, that what we most need to do, is to win over more anarchists (and questioning commies) to our position. Perhaps this isn’t really an expressed idea, but its clear that many tendencies within anarchism believe it. One group recirculates 100 year old pamphlets retracing the same tired arguments on the need for an explicitly anarchist organisation, the other mocks the article and publishes another incomprehensible article against organisations. Regardless of our stance in the debate, we spend most of our time discussing organisation within the left, rather than implementing them and developing a praxis. Certainly we’ll get more out of practical work with the people who are daily fighting oppression than we will discussing ideas on websites. We should also be aware that we’ll never perfect this or that strategy as our approach should always be adjusted for new historical developments. So the question is, when are we gonna shut the hell up and get to it? With all this bickering, and little to show for it, are we any better than Trotskyists who continue to publish newspapers with nothing but attacks on Stalin?

So now that I’ve admonished the reader, I want to move forward with some particular ideas. And mostly, I want to lean on the platformists and especifists, or who ever else finds themselves on that end of the debate.

Platformists and especifists have made their point, it’s been written a million different ways. Its time to move beyond advocating for the anarchist organisation, and get to it. The task of this tendency is not to convince others with words, the task is to actually build the organisation and develop its politics. I think most people in this debate have given little time to what would actually be the strategic orientation of such an organisation, other than it’d be an especifist/platformist organisation. The hardline insurrectionists are (hypothetically) doing their thing, and the syndicalists are moving forward with a solid enough strategy around fast food workers. Its time we got our shit together and actually started discussing the ins and outs of an anarchist organisation that has real strategic and tactical unity.

A Possible Model or Starting Point

To start, I’d like to point to one organisation on the left that I think models where we need to be headed as a tendency. Bring the Ruckus was started in the ashes of Love and Rage Revolutionary Anarchist Federation, and they seem to be a concoction of anarchists and left communists. I think BtR models the sort of organisation often advocated by anarchists of our stripe. They have a specific analysis of capitalism (they’re way into CLR James, if that tells you anything), and from this analysis they have six political criteria that they use to determine whether or not they should be engaged in particular political work. I’m not a member of the group, so this isn’t an advertisement, but an attempt to pull out the valuable organisational structures they use.

We should be spending our energies moving toward something more defined, like this, rather than debating the need for a specific anarchist organisation with people who are entirely opposed to organisation. Obviously, the first task is to coalesce around a defined anarchist analysis of the current world, one that goes beyond “capitalism and the state are bad, and oh yea so is white supremacy and patriarchy.” An anarchist organisation that can’t go beyond this shallow analysis, will do nothing more than hold annual reportback meetings about all the neat things people are doing.

Questions to Ask and Answer

What we need is an analysis that understands the unique nature of living in an advanced imperialist state where capitalism is built upon white supremacy and patriarchy. We need to approach some sort of theoretical unity around the particular way in which capital maintains control in this country, because that theory is the only thing that can inform useful action as a group. In response to the rampant class reductionism of many on the left, many anarchists have been brought up with the idea that all oppression is equal and the same, which I believe substitutes morality for material reality. Capital, white supremacy, and patriarchy all function in different ways, all carry a different historical significance, all interact with one another in different ways. The shallow analysis that treats them all the same, leads to “just do something” revolutionaries who act aimlessly. We need to begin to grapple with things like the central role white supremacy has played in the advanced development of capital and the deep divisions in the US working class. We need to go beyond the Liberal feminism that only stresses internal dynamics (but not without it) to analyze how the unpaid work of raising generations of workers has hindered class unity. The goal is the abolition of class, race, and gender along with the tools that maintain them, but we have to move toward understanding the exact way these play out if we really want to be affective revolutionaries.

We need an organisation that understands how to maximize the impact of a small number of dedicated revolutionaries. In rejecting the synthesis anarchist organisation where we all sink in a boat together, we must also reject the “just do something” strategy that comes with it. Where is struggle already moving forward? What parts of the class are daily in serious conflict with capital and the state? What parts of the country? In what part of the community, is it on the job, or on the block(cell or otherwise). We have to seek out political work where we can be most affective in advancing the class struggle, even if it seems to reject the old ideas about how the struggle appears.

We need a humble organisation that recognizes that it is in the struggle of oppressed people today that the nucleus of the new world exists; and that it is our duty not to lecture people on Kropotkin, but rather to study this new world in the making, challenge its builders, and spread the word about every stride made toward an egalitarian world. We need an organisation that draws its membership from these people, rather than one that requires a masters degree.

Here and there I see organisations that attempt to grapple with these and other important questions, but in general we are without real analysis and strategy. One impetus for writing this piece is to possibly nudge the organisers of the Class Struggle Anarchism Conference away from the standard reportback/workshop conference toward something that can start to actually build toward an organisation with defined politics and strategy. We can all read about what organisations are up to online, in person events such as this are most valuable for being able to struggle with each other toward actually creating the organisation we’re always advocating in facebook flamewars.

We all understand the need for an anarchist organisation with theoretical and strategic unity; our task is to fucking build it. Hopefully this will help spark discussions that can actually lead to something real.

Jasper Conner is also author of Towards a Student Unionism.
See http://zinelibrary.info/toward-student-unionism 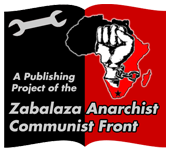